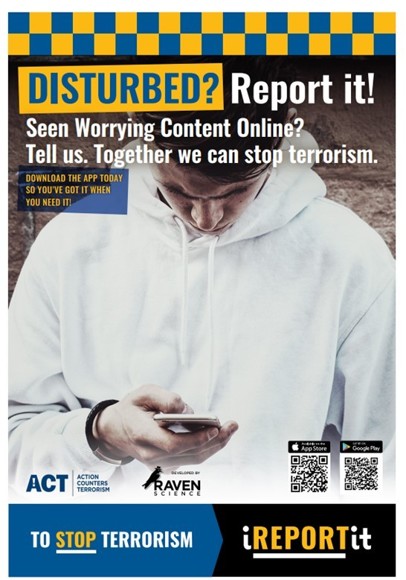 Prevent is a strand of the Government’s Counter Terrorism Strategy (CONTEST). It is about ensuring we all work together to ‘prevent’ children, young people and adults from being drawn into extremist activity, including acts of terrorism.  It is about everyone taking responsibility and knowing what to do if they have concerns.  The Counter-Terrorism and Security Act 2015, contains a duty on specific authorities known as the Prevent Duty which commenced in July 2015.

Channel is a multi-agency safeguarding programme run in every Local Authority in England and Wales.  It works to support vulnerable people from being drawn into terrorism and provides a range of support such as mentoring, counselling, assistance with employment etc.  Channel is about early intervention to protect vulnerable people from being drawn into committing terrorist-related actviity and addresses all types of extremism.  Participation in Channel is voluntary.  It is up to an individual, or their parents for children aged 17 years and under, to decide whether to take up the support it offers.  Channel does not lead to a criminal record.

Referrals made in relation to safeguarding concerns for children and young people that may be at risk of radicalisation are made in the same way as other safeguarding issues.  If there is a risk of immediate harm or danger to a child or young person, you should contact the Police via 999 or the Police Anti-Terrorist Hotline via 0800 789 321.